I embarrassed at least one of my teenagers.

I believe that one of the great joys in life it to embarrass one’s children.  It helps their sense of humor and their humility.  It is also fun.

More on that in a bit.

This should be a shorter effort. I have been writing blogs worthy of Tolstoy in their length (certainly not in their quality), and I worry that I am writing more than most of you want to read.  I have tried to put in extra photos to make the length easier to take.  I know that this was the litmus test for me as a child - a book’s quality was a function of its picture density.

With this in mind, I will give you a quick update, some good photos and our good wishes.

We arrived this morning on the overnight train.  Here is a picture of the girls in one of our rooms.  We have been amused at the ads for ramon noodles in which everyone is simply elated at the idea of eating the noodles.  I mean true ecstasy . . . from noodles.  Here, our lovely ladies channel their inner noodle models.

We were scheduled to arrive around 7.  Susie thought it was a little before 7.  The train was running late, but we did not know this.  We came within seconds of disembarking roughly 60 miles outside of Shanghai.  We agreed that that would have made for a great blog if we lived to tell the tale.

Upon arrival, we took a cab to our hostel, a lovely place bearing a name that fairly drips with feng shui: The “Rock and Wood International Hostel”.  Here Liam is excited to be in touch with his hostel: 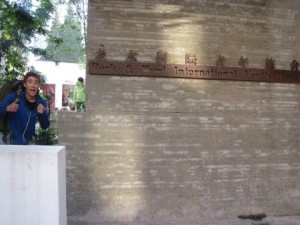 Virginia loved this place from the moment we arrived. 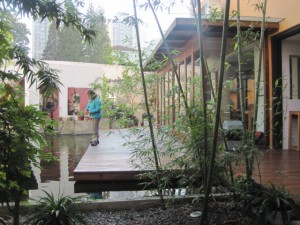 Of course, it helps that there is a wickedly cute puppy running around here. 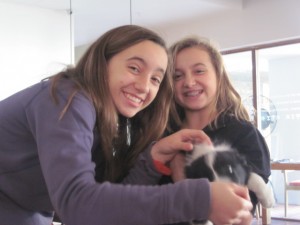 Please allow me to make a brief tangent here.  I am in the cafe/bar of the hostel after a long day.  Everyone else is asleep and I am writing.  Ten feet from me is a foursome that is uniquely hostel-esque.  There are two woman from Sweden, a guy from Turkey and an American.  The Turk seems to be dating one of the Swedes.  The American arrived late to the group.  Prior to his arrival, the two woman and the Turk were a subtle group.  The American is everything that perpetuates the stereotype of the ugly American.  He is loud.  By loud, I mean head-turning, genetically-altered vocal cords loud.  He is also taking every possible opportunity to turn the conversation in a prurient direction.  He is attempting this conversational gambit with the subtlety of a bullhorn or a firebomb.

It is painful to watch.

Back to the blog.

After getting situated at the hostel, we went out to explore Shanghai.  As I noted before, SIngapore is huge, but it is an odd huge.  It is less like NYC than Houston.  The massive population of 20+ million is spread over an area 100 times bigger than New York.  As a result, the population density is a tenth of New York.

We went to the Bund, a lovely riverwalk that provides stunning views of the most striking of Shanghai’s buildings. Here is the view: 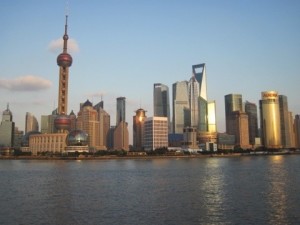 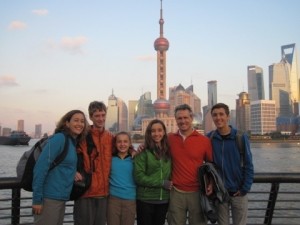 We saw a time-lapsed view fof the Shanghai skyline that was truly remarkable. The area across the river had zero buildings over 3 stories. None,  Nada.  The structures you see in these pictures are all less than 20 years old - most less than 5.  Current plans suggest a doubling of the skyline by 2020.  This, my friends, is a true building craze.

Here is the observation platform: 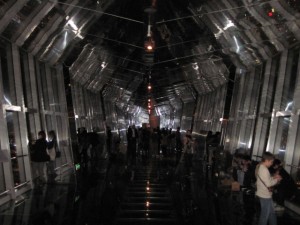 Here is the view: 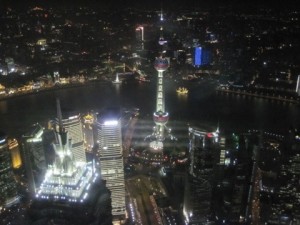 You might notice that we are generally short of pics of Wiley.   He hates the camera.  Many of you have children that attend camp that avoid the camera every day.  Wiley is that child.  He has a 6th sense about the camera pointing his way and will duck like Keanu Reeves in the Matrix dodging bullets. He begrudgingly accepts the occasion family photo, but with great reluctance.

Our family strives for equality. I am aware of the fact that Wiley avoids the camera.  That is the reason for this shot. It is taken in the mirror of the escalator in the Financial Center. 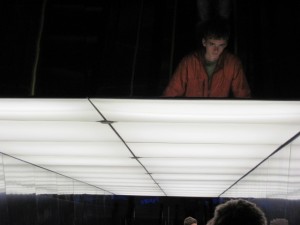 We had dinner at a Moroccan restaurant that was delightful.  We ordered very well, but there were some land-mines in the menu.  Here is one page: 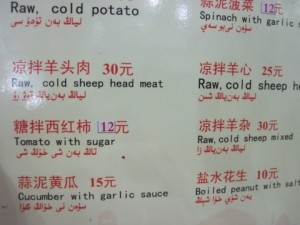 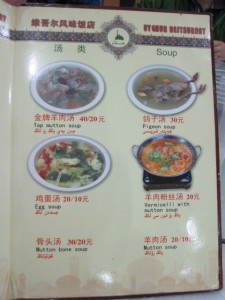 OK, it is time to tell you about my success with embarrassing Liam.  I decided that I would mimic statues in public places.  My initial efforts made for OK photos, but no embarrassments.  Here is me as Chairman Mao. 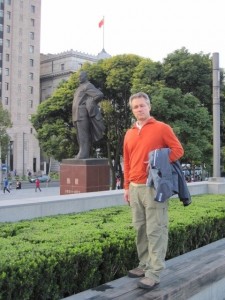 Failure.  They did not care about Mao.

But they did care when their father saw this monument to the Spirit of the People: 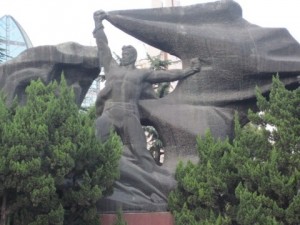 OK, it is 50 degrees out, but that does not seem to bother the statue, so why should it bother me?   There were roughly 25 Chinese people watching on while I decide to mimic this statue.  Here is the effort. 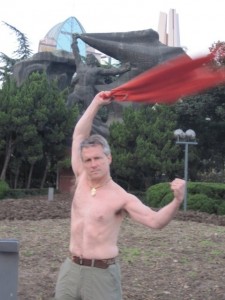 I wish I had a picture of Liam.  Susie took a long time to take the shot (we tried 4-5 times) and she was coaching me . . . slowly.  Liam was embarrassed.  I suspect some of you are as well (I am thinking of you sister Becky).  I guess I should be.  Nevertheless, I was quite amused.