We are the train gang once again.  This time, the overnight train will take us from Shanghai to Guinlin, a city in the south of China (northwest of Hong Kong).  Our other two train rides were both around 14-15 hours, this one will be around 20.  It is NOT an express train.  We think we have made 15 stops so far.

It is the morning and we have 3 more hours of train time.  We are shaking the lethargy and trying to greet the day.

But before we arrive in Guinlin to discover the beauty of rural China, I will wrap up our final half-day in Shanghai.

You know those days when everyone gets along perfectly? The smiles come easily, siblings are generous of spirit, and parents are loved and respected?

If you cannot tell, we had a bit of a testy day yesterday.  Do not get me wrong, we still had fun, but the natives were testy.

We had our share of “he’s giving me that look” and “please tell her to stop humming” or “those are not the right words, don’t sing unless you know the words”.  You know, the standard fare that helps pass the time in the subway or on long walks in the park.

We, however, did have some new conflicts.

We had a particularly good game of misery poker regarding carrying responsibilities.  Do you know the perfectly equitable amount of weight that each child should carry depending on height and weight?  I do not, but I can assure you that each of our four children know with complete crystalline certainly.  The only catch is the fact that each child has a different version of this allocation.

The US Congress is better at finding middle ground than this crowd.

In the subway, we were drinking water.  We had a little in my water bottle and Terrill had a full one.  Susie and I essentially emptied mine.   We told Wiley to drink some of Terrill’s.  She turns her body in a way that says, “don’t bet on it.”

“Please let Wiley have some water.”

What does this mean?  How does she know?  To make this statement, she must know two critical facts: standard saliva production AND Wiley’s production.  What is this measured in – drool per minute?

We like to play a card game called Phase 10.  It is a game something like Uno in that it can be great fun, but it can also involve people skipping other people.  In the context of a well-played game, the Skip card is a tool well used.  In the hands of under-rested siblings, it can be prima facie evidence of malice.  No, not malice - evil.

We had a lot of Skips going on last night.  I will not say exactly who threw cards last night, but lets just say that both people were connected at one point via a single umbilical cord.  The number of participants withered from 6 to a determined 3.  These three stayed not out of a sense of joy, but a sense of obligation that bordered on obsession.

“Should we just declare a winner and go to bed?”

Yep, it was light and easy in the train compartment.  Of course, it does not help that that we are stuffed into a room the size of a bathroom.  I am not talking about the type of bathroom that nice homes have off the master bedroom.  Instead, we are the half-bath tucked underneath the stairs.

[Note: since I am talking about bathrooms, this seems like as good a time as any to share these two photos contrasting the two types of facilities in China. 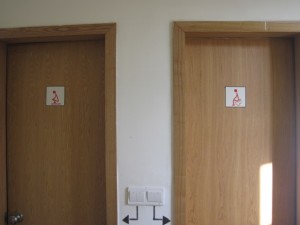 And the equipment revealed: 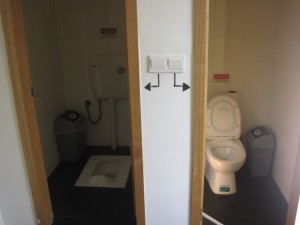 I love the fact that BOTH units are manufactured by American Standard, despite the fact that the unit on the left is not standard at all in America.]

Between the squabbles, we had a nice day.  We spent time looking for a small garden that we would only locate after we had run out of time.

Terrill, however, put it all into perspective.  She said that she has seen this entire Asian trip as a grand journey of discovery, not a series of locations.  As a result, a wrong turn in the Venice of Asia gives us a glimpse of scenes rarely seen.   We find odd restaurants and quirky shops.  We also seem to meet the nicer people when we go off-script.

Our failed trip to the park revealed lovely sites, another Daoist temple and a great lunch. 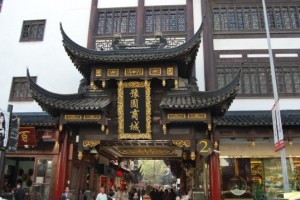 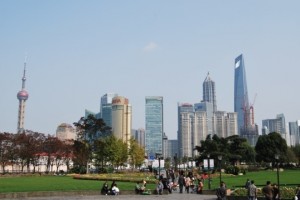 Daoism (also Taoism) is one of the hardest religions for westerners to grasp, particularly because what it claims to be about seems so different from how it actually happens.

In theory, Daoism is not about things or even words.  “The Dao that can be written is not the true Dao, the Dao that can be spoken is not the true Dao.”  The word “Dao” means “way”.  Some people interpret this as “flow”.  It tends to sound like the “Force” from Star Wars at times.  In short, the great Daoist philosophers all believe that truth should be found in pure experience that is not burdened by words or interpretations.  The Dao is in all things and we must lose our egos to connect with it.  Just go with it.  Terrill’s approach to travel (find the joy in the journey without a particular goal) is very Daoist.

A Daoist poem suggest the effect of desire on action:

“The archer that shoots for nothing has all his skill.

But when he shoots for a brass buckle, his hand begins to shake.

And when he shoots for a prize of gold, he sees two targets.

His desire divides his and robs him of his skill.”

A final important aspect of Daoism is the fact that there is no clearly defined divine entity, no God separate from creation.

OK, kinda fuzzy, but you get the idea.

In practice, however, Daoism seems to be the exact opposite.  The temples are full of statues of gods, rulers and stuff.  Worshippers burn incense, pray and bring offerings (including wrapped brownies?!?). 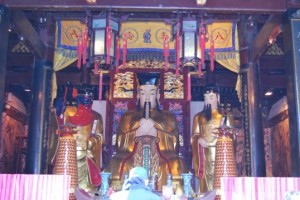 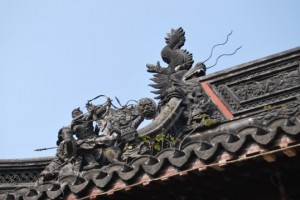 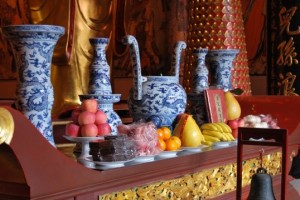 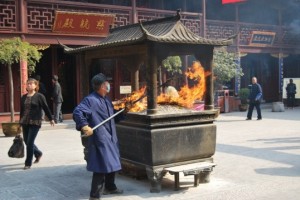 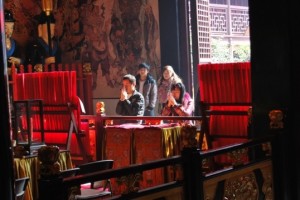 Some gods are more popular than others.  Here are two nooks dedicated to individual gods.  The first is the god of literature: 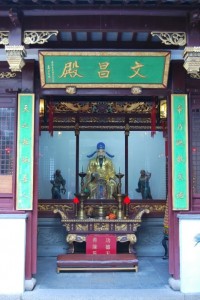 Now, the god of wealth. 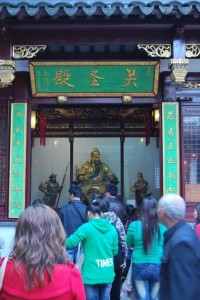 No doubt whose dance card fills up first.  Looks like the god of wealth will be enjoying more brownies tonight!

After we exited the temple, we came to a huge market. The peace of the temple contrasted wonderfully with the din of the market.  The ancient and even superstitious elements of the Daoist ritual were a clear counterpoint to the contemporary and concrete aspect of the Starbucks that greeted us. 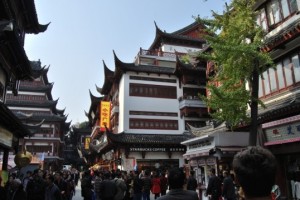 Here is a picture of the family showing some of the contrast between old and new.  We have a traditional teahouse with the Shanghai World Financial Center (the Great Bottle Opener) in the background. 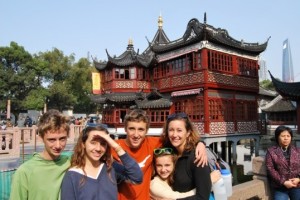 As we walked to the subway, we saw something that greatly amused me.  When we were in Zhujiajiao, we saw nothing that reminded us that it was Thanksgiving.  We saw no turkeys, no Dallas Cowboys or Longhorns on the TV, no parades.  As I said before, we had turtle rather than turkey.

But that makes sense.  This is China, not America.

The Chinese might be numb to Thanksgiving, but they seem to be VERY in tune with its consumer-driven cousins: Christmas and Black Friday.

Here is the street scene outside of the temple, not far from the Starbucks and Dairy Queen. 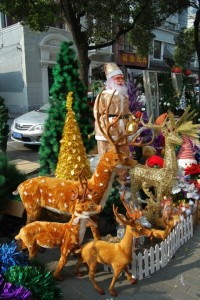 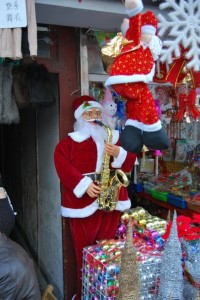 We headed home running short on time before we left for the train.  We were quite hungry.  I suggested that we return to the Moroccan restaurant that we enjoyed our first night here, but Susie wanted something faster and new.

We went to a corner soup vendor that would feed us all for roughly $11.  At this establishment – literally a hole in a wall – we picked the ingredients for our soup.  We had a selection of dried noodles (thin, thick, rice, with cigarette ashes, without), veggies and meat (or meat-like substances).  We could choose from 3 tofus, 4 mushrooms/fungus, 4 herbs, 8 veggies and lots of dumplings.  Here is a picture of the selection. 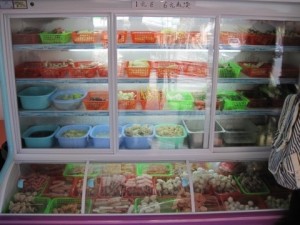 Once we chose our ingredients, we gave them to this woman who then cooked them is a lovely broth. 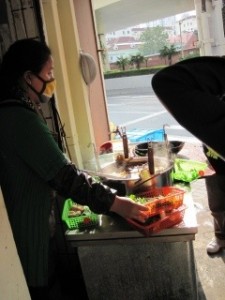 I am not sure if I should be encouraged that she is wearing a mask for the benefit of food cleanliness or worried that she knows something that I do not.

Here is the final product. 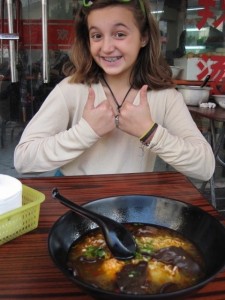 One of the owners or patrons brought out a table for us outside.  At first, I thought this was pure kindness.  In fact, I think it might have started as kindness, but it soon morphed into a source of entertainment.  Suddenly we were like animals in the zoo.  People watched us struggle with long veggies, stringy noodles and the occasional hot pepper.  Passersby stopped to watch. They all laughed but encouraged us on with smiles and gestures.

To be fair, we are really pretty good with chopsticks, but soup is hard with sticks!

Also, they wanted to help us out.  They brought us each a glass of boiling hot water. Combined with enthusiastic hand signals.  We never knew what their use should be.

They took the chopsticks from Virginia’s left hand and placed them in her right.  I suspect that lefthandedness is not allowed in China.  We smiled, put the sticks back into the left hand and continued to slurp.

Lots of people kept looking at Susie while holding up 4 fingers.  The wonder-womb strikes again.

Once fed, we donned our packs (with the burdens poorly distributed, let me assure you) and we were off to the train station.