I am writing on a train to London, so this is a wordier blog than normal that does not have as many pictures.  As a result, I will throw in a few shots from after our arrival before I go further. 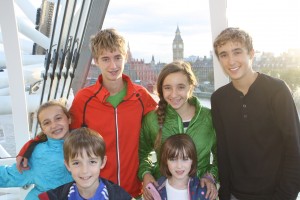 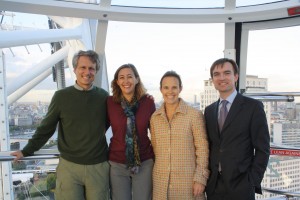 After nine countries and 6000 miles, an unexpectedly lovely and refreshing sound reappears: English.  OK, it is an odd English, but I am assured that it is spoken this way by the people of England.  Did you know that they speak English too?  I love those tidbits of travel trivia.

I studied in London for a year and made some great friends.  One of them explained to me the different English accents: the BBC, Cockney, Midlands, Royal, etc.  When I was here, I could discern roughly 8-9 different English accents as well as accents from Wales, Scotland, Ireland, Northern Ireland, South Africa and Australia.  Now, I can only correctly identify 6 or 7 of the 15.  The ear loses its touch.

I, however, loved the way that Kate explained the haughty royal accent:

Kate: “What do you breath?”

K: “What is another name for a rabbit?”

K: “Now say the words together with your nose pointed up slightly.”

K: “Congratulations.  You have given a royal greeting!”  [Oh hello].

It is hard to grasp that we are on the final leg of our European journey.  The return to English makes this realization particularly palpable.  For the past 50 days, we have been pseudo-Europeans.  While we might see some signs in English or find the occasional English-speaking native, we have lived in countries featuring unfamiliar tongues, histories and cultures.   We stayed in 19 different apartments or hotels, or an average of 2.5 days each.  My rough estimate, we have done a couple of dozen of the “1001 Things to Do” list.  Here is a summary:

Here are a few observations as we ride the train through the French countryside.

I have longed believed that “life is what you sort for”.  In other words, you see what you expect to see.  Coming to Europe, however, I was not exactly sure what to expect.  I generally believe that people can be kind.  I also know that Americans have a reputation as loud (and even rude) travellers.  Would we be embraced or eschewed?

Neither really happened.  We were not Americans so much as just other parents with families.  The people we encountered saw us as such and treated us kindly.  Language barriers might have stood between us, but we always had this common human connection.

I have really appreciated the thoughts and comments about the blog.  As I write about my articles in the summer, blogging is an odd form of communication.  Other modes of communication provide some form of feedback.  When we talk, you respond.  If I email, you email back.  Text messages engender reply texts.  But blogging is dropping a feather on a pillow.  It goes out and makes no discernable sound.

I think that is enough depth for the day.