We went to the Eiffel Tower today.

As a lifelong iconoclast who has eschewed touristy locales, this was a trip I took reluctantly.  I lived in New York for 2 years and never visited the Statue of Liberty or the Empire State Building.  I like the unexpected discoveries rather than the road most traveled.

But my girls wanted to see the Tower and I am more a daddy than I am an iconoclast.

I am glad we went.

I enjoyed the visit not only because it is a ridiculous feat of engineering, but also because I learned a critical lesson.  When you are 46, the lessons come less frequently than when you were a teenager, so I appreciate insight when it happens.

Before I describe my insight, let me share a few interesting facts about the tower.

Gustave Eiffel was a bridge builder that won the competition to create the centerpiece of the 1889 Worlds Fair, which was also a celebration of the 100th year since the French Revolution.  One of the designs he beat out - a huge guillotine.  That would have been a bit awkward I think .

In any event, Eiffel was a very focused and intentional individual.  He designed the tower in-house and built the parts in-house as well.  He delivered the Tower on time and under budget.  It was over 1000 feet high.  Prior to its construction, the highest structure in the world was the Washington Monument at roughly 550 feet.  The US had wanted to be the first to 1000 feet, but they were beaten by an entrepreneurial Frenchman.  On the top of the Tower during the Fair, he met with Thomas Edison who was promoting the phonograph. 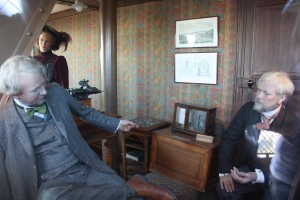 He also chatted with Buffalo Bill and the Sioux Indians he traveled with.

The French government had initially agreed to fund the construction, but Eiffel ended up personally footing the bill for roughly half of it.  In exchange, he required that the French leave it up for 20 years so that he could recoup his investment.  He ended up breaking even in less than 3 years.  At the end of the 20 years, the ownership would go 100% to the French government that planned to tear it down.  Eiffel made it his personal mission (driven more by ego than financial concerns) to finds ways to keep it up beyond the 20 years.

He offered it as a weather observatory, but he saved it for good with the advent of radio.  A 1000 foot tower became a great asset in sending (and receiving) radio messages.

I will not even go into the construction of the tower, but just trust that it was a marvel of engineering as well as creativity.  The engineering required to sink the foundations next to a river is boggling even today.

My lesson today was one of observation.  We rarely see what is in front of us.

Let me explain.  I often think about giraffes.  I have spent my entire life looking at giraffes: in zoos, in books, on TV.  I know that they have long legs and long necks.  They have always been part of my life, so I do not think about them.

Let me borrow your imagination for a second.  Imagine you are the first European to see a giraffe. You are in Africa.  You have spent your life seeing horses and cows.  You might have seen an elk.  Nevertheless, you have a clear idea in your mind about what animals look like - their legs, necks, markings, etc.

So you are now walking in Africa.  You crest a hill and you see your first giraffe feeding on a high tree.  Can you imagine what that would have been like?  Long legs, long neck, small horns, ridiculous tongue, massive spots and a bizarre tail.  It must have been earth-shattering to that person.  He (I assume it was a he) had his view of the world completely altered.

I think the world is full of giraffes.  They are things worth noting, but they are sufficiently familiar that we take them for granted.

The Eiffel Tower is one big giraffe.  You have seen it everywhere - in keychains, in movies and in your aunt’s ridiculous plate collection.  It has become a symbol, and a cliche, of France and Paris.

But it is a cliche worth visiting.

It is huge, clever and magical - especially at night.  For 5 minutes every hour, they illuminate the tower with sparkling lights that are almost like a fireworks show.  Virginia was truly mesmerized.  We have seen the show 3 times and she shows no sign of tiring.

The Eiffel Tower is absolutely a cliche.  But is a also an elegant and inspiring structure.

I, a slightly jaded 21st century American, was delighted to see it as the latter and not the former.

Virginia, of course, does not know what a cliche is.  She does not know this is a giraffe.   She actually sees it. And with her in tow, so do I.

PS  I feel like I have to include at least one of these: 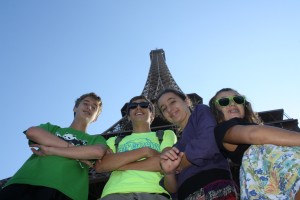