Today is our final sightseeing day.  Tomorrow we will take 3 flights and be on the go for 23 straight hours.  I will spin off from the family in Chicago to fly to Indianapolis for a board meeting of the American Camp Association on Thursday and Friday.  I am wondering how cogent I will be, but I am glad that I am able to attend this meeting.

But today is not about board meetings, it our last day in one of the most fascinating cities in the world.

Here is a fun shot that shows two of the great icons of London. 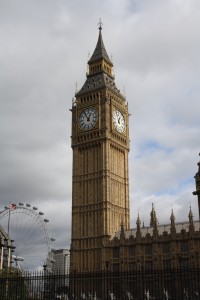 This morning was a trip through Westminster Abbey.  Most Americans know it as the site of royal weddings (William and Kate) and royal funerals (Diana and the Queen Mother).  It is also the seat of the Church of England.  Most notably, it is a walk through the history of England.  In fact, there are times that you forget that you are in a church.  This never happened in Italy or Spain.  In the great cathedrals and churches of Spain and Italy, you see Madonnas, Passions, Martyrs and Biblical scenes.  In Westminster Abbey, you see the tombs of kings and queens, memorials to scientists (Newton, Darwin), writers (Shakespeare, Chaucer, Byron), statesmen (Churchill, FDR, Disreali) and nobles.  If a cemetery and a museum had a child, it would look a lot like this church.  In fact, I think it is interesting that it honors playboys like Byron.  Also, given the continued opposition to Darwin within certain segments of the conservative American Christian community, I was intrigued to see him buried in a church next to Sir Isaac Newton.

They did not allow photography within the church, but I did get a chance to capture one of my favorite memorials in the cloisters.  This particularly attractive and informative plaque recognizes a remarkable man: Captain James Cook.  He is also a great link to the end of this trip (since he was English) and the next trip (Cook discovered New Zealand, the final stop of our final trip).  Cook did not grow up around boats and basically worked his way up to the position as captain.  As such, he captained three expeditions of three years (!?!?) each.  He traveled to the farthest points north and south ever to that date.  He sailed north of the Bering Straight above Alaska and came within miles of discovering Antarctica.  I think our trip was a long one.  He was at sea for months at a time, encountered hostile natives and fought major disease.  We, on the other hand, will never travel for more than 24 hours at a time.  Our worst disease has been a cold.  We did meet a few Hungarians who seemed religiously opposed to bathing, but that seems to be mild compared to spear-throwing Maoris.

This plaque shows the path of his three journeys.  I hope you can expand the photo and see where this crazy guy went.  BTW, in his native Yorkshire, his name would have been pronounced “kook”.  I love that. 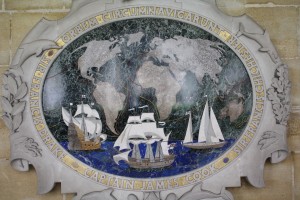 The afternoon saw us visiting the British Museum where we saw items from three great ancient cultures: Egypt, Assyria and Greece.

I am included a few of our favorite photos.  The first shows the style of a Grecian temple, with columns, friezes, and pediments.  Not only is this cool looking, but it is a great example of what the main attraction of the Museum is: the statues of the Parthenon.

Here is the small temple. 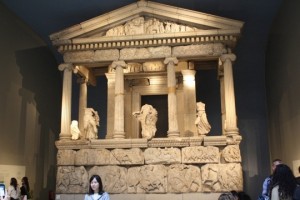 Here are partial statues from the Parthenon in Athens.  They are beautifully presented and explained.  Their superior presentation, however, has done nothing to mitigate the anger of the Greek government.  They desperately want all their ruins back.  Good for tourism, you see.  The Greeks say that the ruins are Greek and belong in Greece.  They were spawned by their ancestors on their soil - they are an intrinsic part of their culture.

The Brits respond that the Greeks were negligent for years and allowed vandalism, neglect and pollution to destroy many of the ruins that the Brits did not take. The English took these treasures when no one cared and curated them for the world to see and appreciate.  The Greeks are welcome to what they still have to discuss Greek history, but the Brits share their ruins as part of a survey of ancient culture.  How do the Greeks compare to the Babylonians or Egyptians?   They want to preserve these treasures as “citizens of the world”.

As a parent, I recognize these subtle arguments.  Here is a summary. 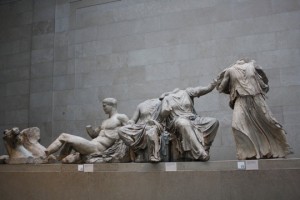 Before I leave, let me share some carvings that were done in 650BC (almost 2800 years ago).  The Assyrian kings would go on Lion hunts.  While I have nothing against most hunting, I struggle with hunting animals at the top of the food chain purely for sport.  As l looked at a wall of carvings, I came to the conclusion that the carver thought the same way as I do.  Look at the sad and powerful way he (I assume it was a he back then) portrayed this terminally wounded and paralyzed lioness.  The kings all looked stoic and indifferent, but the lions all looked full of passion and pathos. 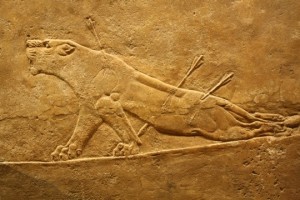 I hope that we will not feel like this tomorrow as we travel!  I worry that this might be some foreshadowing of our condition.

We cannot wait to see our camp family over the next few weeks!