Having an Art Attack

As I have been telling you, the Baskin Clan has been suffering serious culture fatigue.

Yet we had not gone to the Louvre. This presented a true dilemma. Do we miss the largest museum in the world or risk a first-degree meltdown at the museum.

You know the answer. We have told the kids that this is travel, not vacation. So we dragged them out early to be among the first to arrive at the museum.

The kids looked like zombies. Not a happy posse. Yet we soldiered on and arrived early.

Once we were in, we had a great time. In fact, I was quite proud of our kiddos. I admire people who can update their opinions. Most people choose a view and stick to it even if evidence it to the contrary, but open-minded people are willing to “update” their opinions.

Today, our kids updated. They arrived at the Louvre ready to hate it. Instead, they saw the beauty and majesty of the masterpieces. Each child fell in fove with something different. Virginia wanted to see the Mona Lisa (our early arrival made this easy). Terrill wanted to “see what the big deal was about” (she would later love Delacroix’s “Liberty Leading the People”. Wiley wanted to find the martyrs and the odd aspects of the paintings that other people might miss. [Note: he found 3 different paintings that included dwarfs holding parrots. Who notices that?!] Liam was our most reluctant art-lover. In fact, he would wait until the afternoon to become truly excited. 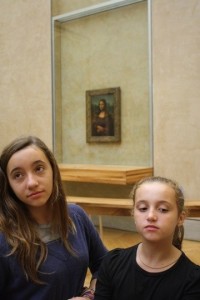 Here is the Delacroix masterpiece that symbolizes the French fight for democracy. 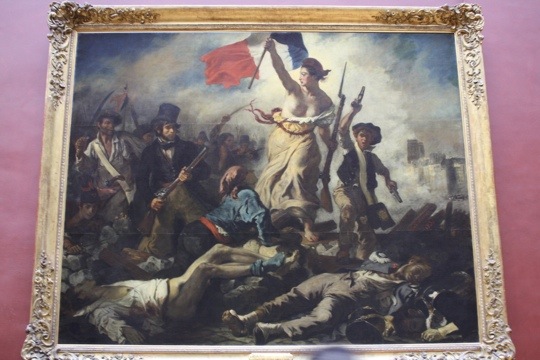 As Rick Steves notes, the French were not the first to democracy (we were) or the best at it, but they have had to work harder than almost any other country. The current government is the 5th (!) republic since their first efforts. The other republics were interrupted by Napoleon, Otto Van Bismarck, Hitler, etc.

As a rule, I have avoided posting works of art with any nudity, but I have made an exception for this piece for three reasons. First, Terrill loved it. Second, it is Delacroix’s masterpiece and critical to the French psyche. Finally, it is REALLY hard to post Louvre masterpieces without some nudity. Venus de Milo? Out. Most anything by David, Tintoretta or Veronese? Gone. Michelangelo’s sculptures? No way.

Terrill’s other favorite (and perhaps mine as well), was Winged Victory of Samothrace from Greece in 270 BC. This piece (like the more famous Venus of Milo) is an original and is missing some parts. Even without all them limbs, this piece grabs you. She is leaning forward against the wind at the prow of a ship celebrating a great victory. She is solid while her robes blow back against the wind. 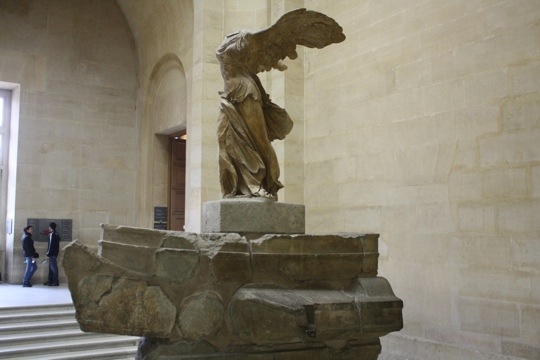 I also wanted to share a great line from our constant travel advisor – Rick Steves. The hand for Winged Victory was found in 1950 in Turkey. Once found, the French government started to negotiate with the Turks to re-unite the hand with the statue (which they had taken years earlier). They ended up getting it. Here is how Steves summarized it: “Considering all the treasures that France had looted from Turkey in the past, the Turks thought it only appropriate to give the French the finger.” Here is it. 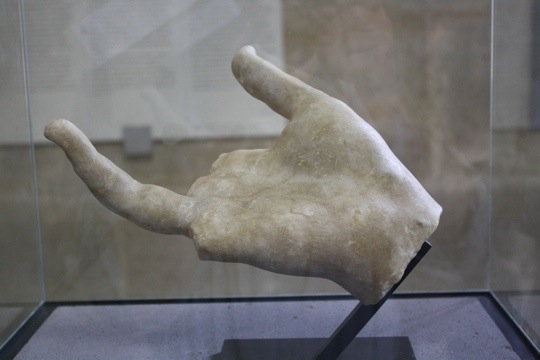 As I mentioned, Wiley tends to notice fun aspects of paintings. One massive David featuring the Rape of the Sabine Women (actually just the kidnapping of the Sabine women, but still a wild scene) had this little detail at the bottom. Wiley smiled and said, “ah twins – I know what that is like!” 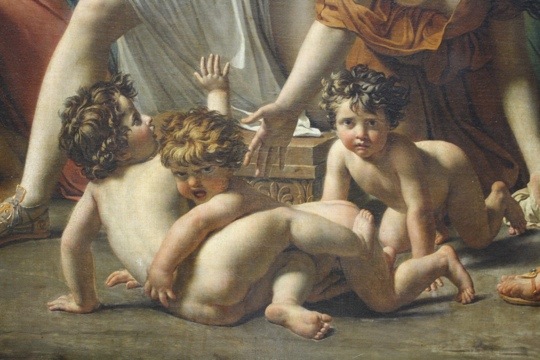 Here are 4 pictures of the kids on marble pedestals outside the Louvre with the famous IM Pei Pyramid behind them. Each chose their pose. Virginia wanted to wold the pyramid. 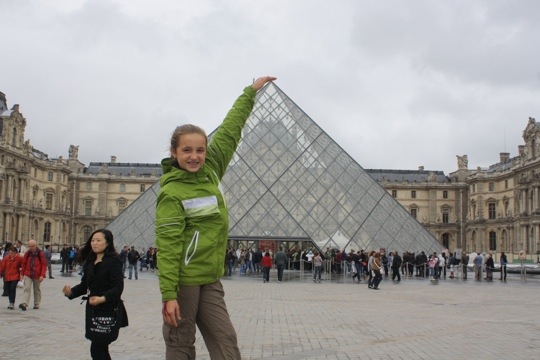 Terrill chose several, but I selected the one where she looks the happiest. 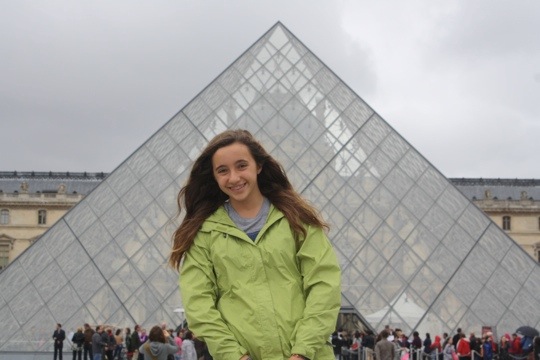 Wiley (with the help of Liam miming as an archer) is Saint Sebastian, tied to a tree awaiting arrows. 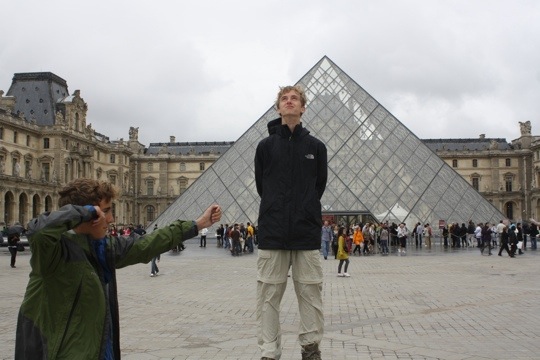 Liam simply did not want to pose. 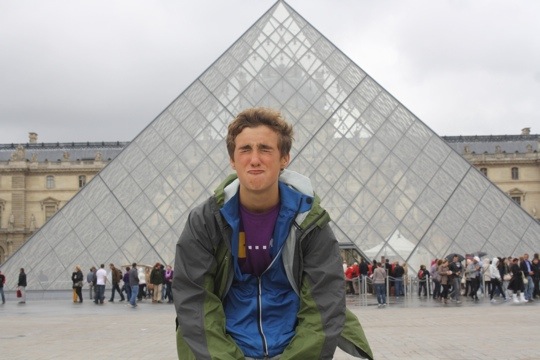 Susie and I just wanted a picture of the two of us. 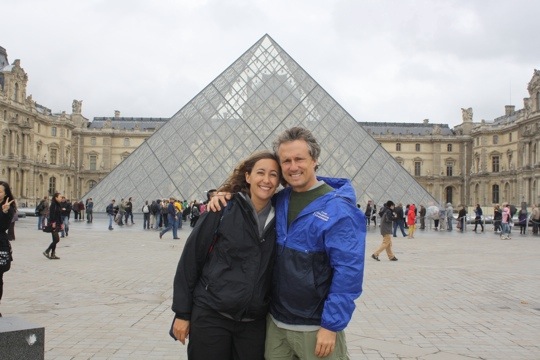 Before I leave the Louvre, I want you to know that I saw evidence of prognostication today. I woke to see that Apple founder Steve Jobs died today. While at the Louvre, I saw a statue of Apollo that is hundreds of years old. He has just killed a monster. So what is he doing? Look closely. I think he is showing off an iPhone. I am guessing that he just tweeted: “OMG, just killed big dragon. C U all later!” 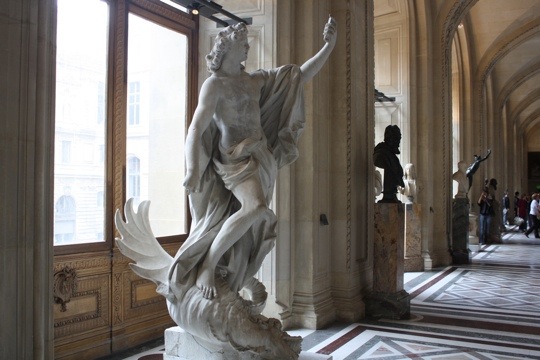 We left tired. We had spent over 5 hours there and were hungry. We grabbed lunch and I made an offer to the crew – we could go to the Pompidou Center (the 20th Century modern art museum) or go back to the apartment and watch a movie. I had been pushing the culture pretty hard and I thought they deserved to take it easy if they wanted. I was surprised when Wiley said, “I would at least like to check it out.” The rest capitulated and we were off to the odd Pompidou complex.

It is a building with all the guts on the outside: escalators, duct work, pipes, etc. Inside, they have a very eclectic and modern collection.

Here, Liam came alive. There were strange things here. We saw two circles made of cassette tape that were floating and dancing in the air powered by an electric fan. We contemplated cubism; balked at solid black canvases and peeped at Picasso. At their age, I had struggled to even mildly appreciate modern art, but they seemed to find many of the works fascinating and fun. Wiley interpreted at least three of the paintings to the point of laughter. Terrill made informed and insightful comments. Liam was delighted at the chaos and freedom. As he left, he rated the 3.5 hours there a “9”.

You might have noted that I have said nothing about our most enthusiastic artist. Virginia loved the Louvre, but had little to say about the Pompidou. At some point, she ran into something that gave her hives. We are not sure if it was bathroom soap or our kabob lunch, but this was our second incident in3 weeks. Susie decided to give her some Benadryl that we carry for just such an occasion.

The Benadryl worked. Oh yes, it worked very well. Virginia became an additional exhibit in the museum. Here she is. 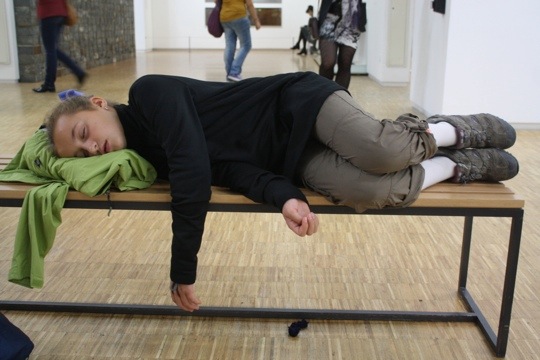 Crowds of French children on a field trip were much more interested in the 10-year-old zonked out on the bench than the Kandinskys. The siblings were less than thrilled to find out that she was so for gone that she drooled rather profusely on their jackets and backpacks, which served as pillows.

Perhaps the best part was her location. Within 15 feet of her sleep-bench stood this painting: 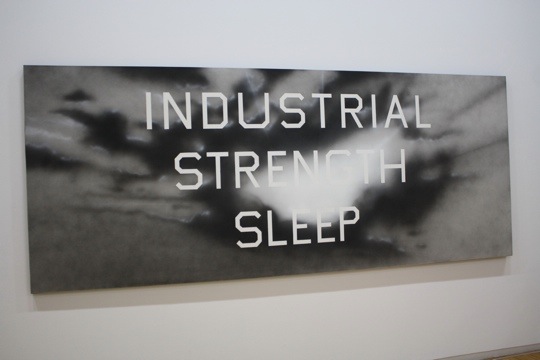 Before Virginia conked out, we got the kids to act as part of an installation. 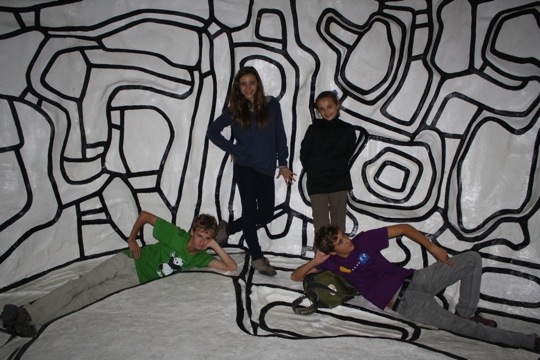 We leave for England tomorrow. We will be staying with a couple that we met on our Honeymoon, so we are extra excited!