We have loved being in London.  After 7 weeks of living in apartments and rented rooms, we are staying with dear friends.  I was shocked to learn that we have not seen these friends in person since 1996, yet we picked up as if we had not missed more than a year or two.

Some friendships simply transcend time and place.  I am not sure what creates fundamental compatibility, but we have it with this couple of Londoners.

I hear you ask, “How did you meet them?”

I am glad you asked.

In September 1994, Susie and I married and went on a honeymoon in Turkey and Greece.  We started in Istanbul, but soon moved out of the city to more remote locations.  We flew to Selchuk (near the spectacular ruins in Ephesus) and spent the morning walking around. By the mod-afternoon, Susie was feeling ill.  By the afternoon, she had “flu-like symptoms” in a big way.

There is some speculation of the source of her illness with both a simple and an exotic explanation.  The simple explanation involves her eating a salad that had been washed with Turkish water.  This water brought with it a little Motezuma’s Revenge (or perhaps Suyleman’s Revenge) and it made Susie sick.  We, however, also proffer a more exciting possibility.

After walking through the touristy part of Selchik, we decided to walk around the back streets to see the real communities.  Istanbul was already a modern, secular city, but Selchek was a conservative Islamic community with a few touristy streets to cater to the Ephesus crowd.  As you know, the conservative Islamic community finds female skin offensive.  Since it was hot in September, Susie was wearing a skirts and a light blouse with exposed shoulders.  She looked beautiful and somewhat European (we had people guess French and Italian), but to the natives, she must have looked like a serious Western sinner.

We did not think about the effect our stroll might have on the local population.  Heck, we saw much more revealing outfits in the tourist areas.  The tourists, however, were smart enough to stick with on the beaten path.  Not us.  We went through the streets freely.  As we strolled, we came upon a family in the street featuring a cute 5 year old and her grandmother sitting outside a home.  As we walked by, the grandmother hid her child’s eyes and gave Susie a raspberry.

Some locals explained that this was the “Evil Eye”.

This is the alternative explanation of Susie’s ailment.  Perhaps she dressed spicy and her body got dicey.

In any event, I went to grab some food for us and brought it to the room.  To put it mildly, my lovely bride was taken aback at the smell.  She banished me from the room.  I was to leave, eat, make sure I was clean-smelling when I get back.

While outside of our hotel, I was eating and having a drink.  Sitting alone, I suddenly heard a lovely English accent.

“I met with them after I returned from Davidson College.”

I am not the type of guy that accosts strangers on vacation, but this was too much to ignore.  I am a confirmed Anglophile and this was a great BBC accent.  More importantly, Davidson is my beloved alma mater.  Finally, Davidson is notably tiny with roughly 1800 people at the school.  To hear that accent talk about Davidson necessitated a conversation.

That is how I met Lucy Congrev and Colin Evans.

We quickly became mutual smitten and talked for over an hour.  I did not concern myself with my bride.  She wanted me gone and I was gone.  She wanted to sleep and I was out of the way.  In the meantime, I was enjoying rich and lovely conversation.  In fact, I think I was describing my wonderful new wife to my new friends.

Susie, however, was starting to have mild delusions.  In her sick state, she had a nightmare in which I had been taken by someone (Turks? Travel Agents?) and needed help.  Being a committed spouse committed to my rescue, she rose from her bed and staggered out of the room and out of the hotel.  I looked up to see her weaving her way from the hotel like a wraith.  I rushed to her to see what had engendered this emergence.

“Maybe, but I have something that you must share with the doctor.”

“An allergy?  A previous health history?”

“Make sure they use clean needles!”

Susie is intrigued with medicine.  I am convinced that she is better diagnostician than most of the doctors I know.  In fact, I am sure she would have been a doctor had they a more sane training regimen.  Susie understands the importance and joy of sleep and a medical rotation sounded like torture on earth.  She trained at Kellogg Business School to manage a major hospital.  We are lucky at camp to have her skills running our Health Center.

But as is often true of medical experts, she knows stories of every conceivable medical malady.  Activities that would never strike me as even mildly dangerous create risks that must be mitigated.  Apparently, unclean needles in Turkey were such a risk – so much so that the idea of ‘clean needles’ managed to pierce her consciousness in a away that ‘stay in bed, you are sick’ or ‘he had only been gone an hour and probably has not been kidnapped’ could not.

After having a nice doctor give her a once-over, we knew she was OK and was 100% 2 days later.  In the meantime, we decided to travel with Colin and Lucy.  We had a car and no one had hard reservations, so we chose locations and explored.  While our time together was short (10 days in Turkey and a week in Texas 2 years later), we have kept in touch.

Our reunion has been a true delight.  They have 2 darling children, James 8 and Olivia 7.  Frankly, there are few things more cute than a young child speaking with an English accent.

Today was a light day.  We watched England lose in the Rugby World Cup (Colin took it with a stiff upper lip) and Texas get pummeled by OU (I was less circumspect, but better than normal).  We also walked around the city and visited one awesome museum – the Churchill Museum and Cabinet War Room.

As the war broke out in 1941, the English created a secret shelter that was the nerve center of the British war effort.  It was bomb-proof-ish.  Apparently, it would not have survived a direct hit even after they covered it with a 6-foot barrier of steel and concrete.  Luckily, the direct hit never came and the efforts to fight the Fascists continued from this bunker.

Here is a picture of the main communication room. 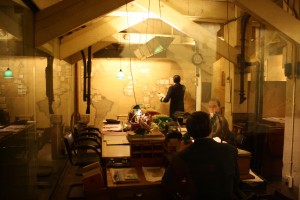 Here is the tiny closet that housed the first “hot line” to the US, where Churchill would talk directly and secretly with FRD or Truman.  This room was such a secret that even the folks in the bunker did not know about it.  It was inside a broom-closet sized room that required a key. To assuage suspicion, the head leaders created a story that the room was the private bathroom of Churchill and that it had the only flushing bathroom.  That story reduced curiosity and maintained the secret.

Churchill is one of the most fascinating figures I have ever studied.  He started his political career as a mild conservative, quickly switched to a borderline Socialist and hen became the voice of anti-Hitlerism.  He was an orator of the first order and a water-colorist of the second order.  He predicted the manipulations of Hitler and was swept into power when the predictions proved true.  He led as well as any statesman in the 20th Century

I also want to share a picture that I love from today.  I wish we had more sun, but the contrast between the Memorial, the building and the vines is quite pleasing to me.

Tomorrow, we tackle the Tower of London and the National Gallery.  Colin and Lucy  are horrified at our pace, but our kids are holding up very well.  I look forward to sharing our many discoveries tomorrow.